Tackling the menace of Fall Armyworm (Spodoptera frugiperda) in India

Facilitate collaboration with partners from agricultural value chain to fight against fall armyworm and bolster farmers’ income and livelihood.

Project Safeguarding Agriculture & Farmers against Fall Armyworm (Project SAFFAL-प्रोजैक्ट सफ़ल) is a multi-year project aims at safeguarding agriculture and farmers against fall armyworm in India. The project SAFFAL is conceptualized by the South Asia Biotechnology Centre (SABC) and supported by FMC India Pvt Limited and is implemented in collaboration with key stakeholders from agricultural value chains who may be potentially impacted due to the rapid spread of Fall Armyworm in India and across Asia. 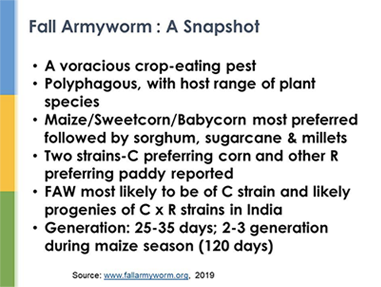 Fall Armyworm (FAW) (Spodoptera frugiperda), a native of Americas, is an invasive pest spreading across the world, with its incidence in African agriculture in 2016 followed by its first-time appearance on maize in the Indian state of Karnataka in July 2018. In last couple of crop seasons, the fall armyworm has emerged as a major threat to farmers & Indian agriculture due to its high incidence and consequent damage especially to maize. The early emergence in crop life cycle, voracious feeding habit, large-scale aggressive behavior, high reproduction, fast migration and irreparable nature of crop damage, all make it a key pest. Notably, the FAW feeds on many host plants and has been found on sweet corn, baby corn, maize, sugarcane and sorghum, and can feed on many other agriculturally important food & feed crops in India. As of now, the pest is reported in the states of Andhra Pradesh, Arunachal Pradesh, Bihar, Chhattisgarh, Gujarat, Jharkhand, Karnataka, Madhya Pradesh, Maharashtra, Mizoram, Manipur, Meghalaya, Rajasthan, Tamil Nadu, Telangana, Tripura, Uttar Pradesh and West Bengal. 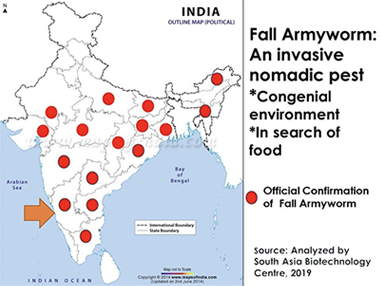 In this context, the FAW presents a significant challenge to smallholder farmers by substantially increasing cost of production, reducing productivity and farmers’ income and thus a considerable threat to Indian agriculture. “Practical experiences of successfully dealing with pink bollworm in cotton through involvement of smallholder farmers will be explored and replicated to overcome the threat of fall armyworm”, stated Dr. CD Mayee, a renowned plant epidemiologist and the President of the South Asia Biotechnology Centre (SABC), New Delhi. In the recent past, SABC in collaboration with key stakeholders has successfully implemented a massive program “war on pink bollworm” in Vidharbha region of Maharashtra.

FMC India, a leader in the crop protection industry in India, has come forward to support and sponsor the fight against FAW as a part of its commitment to sustainable agriculture and promoting IPM. “We at FMC are truly committed to support the Indian farmers with the right tools and technologies to help make agriculture sustainable. Supporting Project SAFFAL is key to the farmers’ livelihoods, which is what FMC is all about,” said Mr Pramod Thota, President of FMC India

Ms Bethwyn Todd, the Asia Pacific President of FMC, who was in Mumbai to sign the sponsorship agreement with SABC on the project said, “Fall Armyworm is a highly destructive pest and is known globally to have caused a serious challenge to farmers across continents and across crops. Education is the key to success about managing this pest. We are committed to partnering with farmers, the scientific community and governments in tackling this challenge and Project SAFFAL is one such example”.

Fall Armyworm has caused extensive damage to crops, especially Maize, which is very critical for the animal feed industry and also crops such as sugarcane and millets. Consequently, India is forced to import maize for feed and starch industries, which together consume nearly 80% of the domestic production. 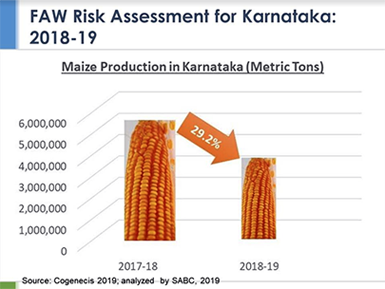 In the present time of distress, Project SAFFAL calls upon the stakeholders to work together with farmers, the scientific community, SAUs and government at Centre and States in tackling the highly destructive pest. The project with its salient features intends to address the knowledge gap, comprehend the nature of fall armyworm, its biology, life cycle, feeding habits, adverse economic impact assessment, distribution and migration, and host-pest interactions, organize farm demonstrations in collaboration with both public and private sector institutions to showcase IPM package of practices and build capacity & skills of smallholder farmers in India and across Asia. In nutshell, the project SAFFAL aims at developing a suite of techniques, good agricultural practices and control measures along with educational material for various stakeholders to enhance farmers’ preparedness to tackle the menace of fall armyworm The salient features of Project SAFFAL (प्रोजैक्ट सफ़ल) are summarized as below;

The South Asia Biotechnology Centre (SABC) is a not-for-profit scientific organization that aims at serving as a knowledge hub, helps in bridging the knowledge gap between science and society and facilitates the transfer of innovative farm technologies from the lab to the land. More about SABC at: www.sabc.asia

For regular Fall Armyworm updates right in your WhatsApp Inbox, send us a WhatsApp message 'SUBSCRIBE' on +91 99998 51051