A gregarious eater and destructive pest of maize crops, Fall Armyworm, is a polyphagous lepidopteran. Originating from South America, the pest has spread all over the globe and assumed the position of level A1 threat. The European Union recognizes the pest as a quarantine pest, which established its dominance in African maize fields during 2016. In mid-2018 Indian invasion began, starting from the Southern region in Karnataka, and metastasizing to Central, Eastern and North-Eastern regions as well.

“Fall Armyworm is a crop-guzzling pest that derives its name from army as it invades crop in masses, much like an army”

FAW’s ability to spread at a rapid pace arises from its reproductive and adaptive capabilities. The life cycle begins when the female adult moth elicits mating calls to attract the male moths. Post engaging in mating, the female adult moth embarks to lay egg-mass, either on the base of the plant stem, below or above the leaves. Egg-mass usually comprise of 50-200 eggs and covered with protective scales from female moth’s abdomen. Eggs hatch within 7-12 days and out come the neonate larvae, resulting in the outset of ferocious eating ceremony, going on through the larval phase of development.

“Fall armyworm has rapidly spread across maize growing States since it was detected in Southern India in late mid-2018. Most of countries in Asia including Bangladesh, China, Indonesia, Myanmar, Nepal, Sri Lanka, Taiwan and Vietnam have reported severe infestation of FAW in last one year” 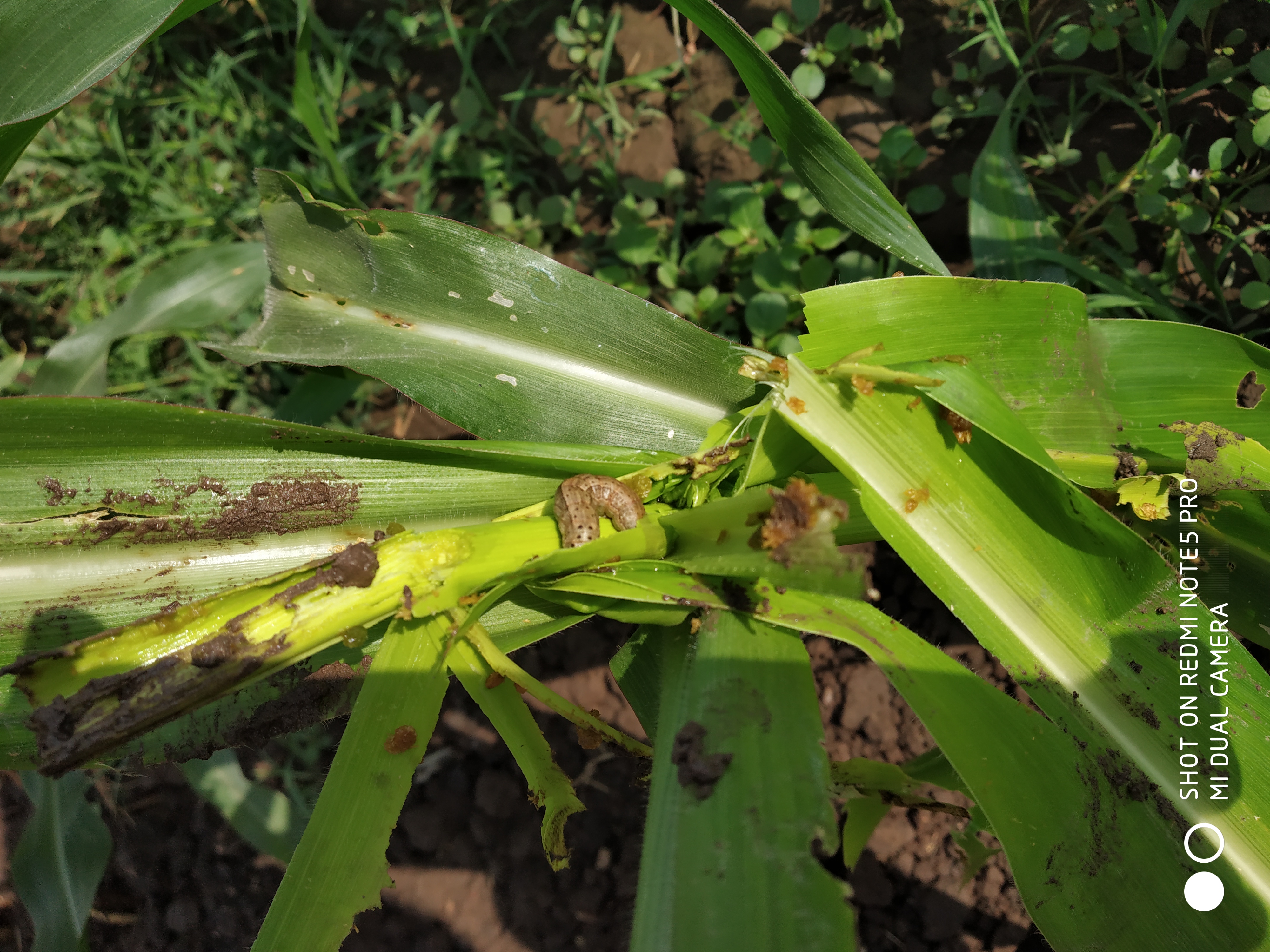 The neonate larva while feeding on the superficial leaf surface, produce the characteristic windowing effect. These larvae also spun silk threads which are carried by wind to neighboring plants by winds. Larval feeding varies with the plant developmental stages, wherein the maturing larvae move from the foliage to whorl as the plant undergoes different Vegetative stages of development. Additionally, as the feeding moves from foliage to whorl, the nature of damage changes as well. The foliar damage also shows varied forms such as pin-point holes, scratches, whereas the leaves emerging from damaged whorl show large ragged holes in a paper doll pattern.

It is the larval stage of FAW which inflicts severe damage, which if not controlled, can bring entire season’s produce to waste. The pest thrives best around a temperature of 25-30 degree Celsius, whereas development slows down at colder temperatures. Furthermore, besides the maize plant, which is the most favored food, FAW can feed on an exhaustive range on vegetable crops and grasses such as bermudagrass, crabgrass, Digitaria spp. Beside frequent attacks on field maize, sweet corn and baby corn. The field crops such as alfalfa, buckwheat, barley, maize, cotton, clover, millet, rice, maize, peanut, sorghum, ryegrass, Sudan grass, Sugar beet and sugarcane etc.

“Fall Armyworm, a polyphagous preferably feed on maize and can affect and cause heavy losses to many crops including maize, sweet corn, baby corn, sorghum, millets, sugarcane etc.”

As the pest can adapt to a large number of host plants, exhibits expansion in taste receptor genes, ability to migrate to fields during the night, combined with strong flight abilities of adult moths, make FAW a pest of high danger amongst other factors. Hence, to protect produce from FAW, prevention is better than cure.

In this direction, the Project SAFFAL (प्रोजैक्ट सफ़ल), Safeguarding Agriculture & Farmers against Fall Armyworm, conceptualized and implemented by the South Asia Biotechnology Centre (SABC) – a not-for-profit scientific organization is a multi-year project to safeguard agriculture and farmers against fall armyworm in India. The project SAFFAL is supported by FMC India Pvt Limited, Mumbai and a global leader in sustainable crop protection and is executed in collaboration with key stakeholders from agricultural value chains which potentially may get impacted due to the spread of Fall Armyworm in India and across Asia.

A pest of gregarious hunger, intense feeding, and favorer of maize, Fall Armyworm has already resulted in significant reduction in maize production in Southern India and is likely to pose a grave danger to farmers’ income, livelihood and national food security

In the present time of distress, Project SAFFAL calls upon the stakeholders to work together with farmers, the scientific community, SAUs and government at Centre and States in tackling the highly destructive pest. The project with its salient features intends to address the knowledge gap, comprehend the nature of fall armyworm, its biology, life cycle, feeding habits, adverse economic impact assessment, distribution and migration, and host-pest interactions, organize farm demonstrations in collaboration with both public and private sector institutions to showcase IPM package of practices and build capacity & skills of smallholder farmers in India and across Asia. In nutshell, the project SAFFAL aims at developing a suite of techniques, good agricultural practices and control measures along with educational material for various stakeholders to enhance farmers’ preparedness to tackle the menace of fall armyworm The salient features of Project SAFFAL (प्रोजैक्ट सफ़ल) are summarized as below;

The South Asia Biotechnology Centre (SABC) is a not-for-profit scientific organization that aims at serving as a knowledge hub, helps in bridging the knowledge gap between science and society and facilitates the transfer of innovative farm technologies from the lab to the land. More about SABC at: www.sabc.asia

For regular Fall Armyworm updates right in your WhatsApp Inbox, send us a WhatsApp message 'SUBSCRIBE' on +91 99998 51051